Berlin based power trio WEDGE have shared details about their third album to be released in January 2021 via Heavy Psych Sounds. Check out the band’s statement below as well as the first two tracks streaming via the band’s homepage! To shorten the wait you can now also watch a one hour live session by WEDGE taped in the summer of 2020 for infamous German TV program Rockpalast. Go to YouTube to check out the full set! 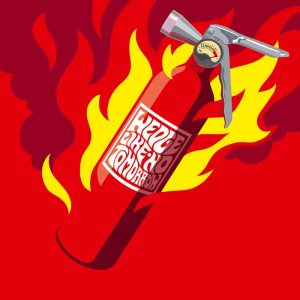 „It’s finally official: Our new album „Like No Tomorrow“ will be released on January 15th 2021 on Heavy Psych Sounds!

We worked hard on this one and we are very proud of the result. Of course the new record provides the rocking power you are used to get from us. But this album is special. We feel that the songwriting has developed quite a bit and overall it sounds more solid and mature than it’s precursors. You can listen to the first song of the album right here.

For any fan of vintage hard rock, acid rock or good old school related long hair music this record is a sure shot. You love buzzing fuzz guitars, Hammond organ and vocals trough a swirling Leslie cabinet, more cowbell? It’s all here. But at the same time it was important for us to bring in a fresh impetus to the table, creating a connection between our analog sound and the 2020s.

Also lyrically the tunes are picking up on our zeitgeist, dealing with topics like digitalisation, mass migration, current social issues among others. So it’s no coincidence that the record’s title is a direct hint at our crazy times as well, in which it feels like the end of the world might be lurking just around the very next corner. Ecological disasters, crazy conspiracy theories, political tensions/divisions, protests and riots, crowned by a global pandemic sometimes make us feel as if there might be no tomorrow.

All this is captured in the cover artwork designed by Kiryk himself. It depicts a burning fire distinguisher as a metaphor for the apocalyptic feeling many of us encounter these days and the powerless feeling that we are about to destroy the very thing that could save us. But rather than being too pessimistic about all that, we want to convey a positive message: